How to achieve 'functional fitness'

I can’t breathe: What it means for law enforcement

Why officer safety must be a top agency priority

Nearly 200 courses and 1100 videos. Sign up for Police1 Academy today!

Digital Edition: How to harness the power of AI in law enforcement

A letter to the American public: We need to increase the quantity and quality of police training

Defensive tactics training: Preparing for your moment in front of the muzzle

Responding to changes in law enforcement

Freedom of speech: Social media and the public sector

‘Confessions of a Former Bastard Cop’ – NOT! 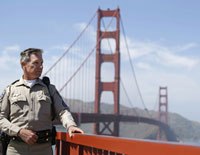 In 2017 there were nearly 120,000 full-time law enforcement employees in California; roughly 78,500 were sworn LEOs and 41,000 were civilian staff. Of sworn officers, about 48% were municipal police officers, 39% were county sheriff officers and almost 10% were with the California Highway Patrol (CHP). Follow this page to keep track of law enforcement news, the latest police jobs and police department updates in the state of California. Learn how major events in California have changed the law enforcement landscape nationwide, including the Newhall incident in 1970, the Norco shootout in 1980 and the North Hollywood bank robbery in 1997.