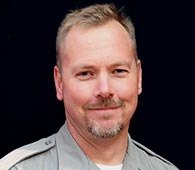 Patrick (Pat) Novesky has spent most of his life working in a rural environment not only in law enforcement, but also has been employed as a wildland firefighter working several states and as a guide for a hunting outfitter. Pat’s law enforcement background consists of a 20 year career ranging from positions as a sheriff’s deputy, ranger, and police officer holding assignments as intelligence officer and investigator. Pat has also been assigned to two narcotics task forces. Pat has served as a police firearms and Verbal Judo instructor and has been involved with various training for all types of law enforcement & other users of the outdoors and remote areas. The past several years of Pat’s career have been spent working as a conservation officer in Northern Wisconsin. Pat’s goal is to bring a common sense approach to issues that pertain to the rural law enforcement officer.