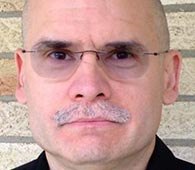 In his 31st year of law enforcement and after approximately 20 years of street patrol, Sergeant Charles E. Humes, Jr. now serves as a supervisor in Support Services of a large Midwestern police department. Humes is recognized internationally as one of the pioneers of modern, realistic police defensive tactics training. He has taught seminars and instructor certification schools as far West as Alaska and as far East as North Carolina; and has trained police instructors from as far as Hong Kong.

For over three decades, Sergeant Humes has authored highly acclaimed police training articles, which have been published in a wide variety of law enforcement publications. Humes’ articles and his hands-on training have been continually recognized for their substance; as Humes’ work has been cited or acknowledged in eleven training manuals and/or survival oriented books authored by other trainers.

Sergeant Humes is the author, director, editor, and producer of a top selling police video training tape entitled DYNAMIC STRIKING TECHNIQUES. It is in use by police departments, training academies, and individual officers worldwide including members of the Anti-Terrorist Unit at London’s Heathrow Airport. With an unwavering personal commitment to excellence and professionalism, Humes' passion is to give students the best, in no-nonsense, street-proven effective, tactics, techniques and concepts.