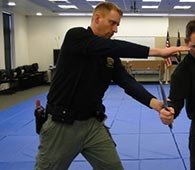 Jeff Paynter is a detective with the Lakewood (Wash.) Police Department. He is currently assigned full time to the Washington Basic Law Enforcement Academy as the Defensive Tactics Coordinator. Detective Paynter became a student of Kali and JKD under Sifu Christopher Clarke in 1999. He has been a law enforcement officer for nineteen years, and began training under Robert Bragg at the Washington State Criminal Justice Training Center in 2001. He has been a Control/Defensive Tactics Master Instructor since 2004, and is an LVNR Instructor (ACCT), certified through the National Law Enforcement Training Center in Kansas City.