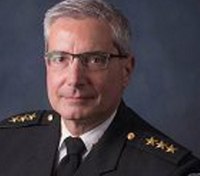 Mike Ranalli, Esq., is a program manager II for Lexipol. He retired in 2016 after 10 years as chief of the Glenville (N.Y.) Police Department. He began his career in 1984 with the Colonie (N.Y.) Police Department and held the ranks of patrol officer, sergeant, detective sergeant and lieutenant. Mike is also an attorney and is a frequent presenter on various legal issues including search and seizure, use of force, legal aspects of interrogations and confessions, wrongful convictions, and civil liability. He is a consultant and instructor on police legal issues to the New York State Division of Criminal Justice Services and has taught officers around New York State for the last 11 years in that capacity. Mike is also a past president of the New York State Association of Chiefs of Police, a member of the IACP Professional Standards, Image & Ethics Committee, and the former Chairman of the New York State Police Law Enforcement Accreditation Council. He is a graduate of the 2009 F.B.I.-Mid-Atlantic Law Enforcement Executive Development Seminar and is a Certified Force Science Analyst.