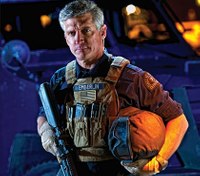 Rich Emberlin is a 30-year law enforcement veteran who served most notably with the Dallas Police Department’s elite units, including Dallas SWAT, the Criminal Intelligence Unit and the Office of the Chief of Police. During his 15 years in SWAT, Rich participated in thousands of missions, including counter-terrorist operations, hostage rescues, barricaded suspect situations, and arrest and search warrant executions. As a detective in the Criminal Intelligence Unit, he was responsible for investigating protest groups and threats against government officials and police officers. Rich retired from the Dallas Police Department in 2016 and remains active in the industry as a law enforcement expert and instructor. He has appeared on shows including A&E Networks’ Live PD and Dallas SWAT, the Outdoor Channel’s Elite Tactical Unit and NRA-TV. Rich continues to serve his community as a reserve deputy for the Tarrant County Sheriff’s Department.