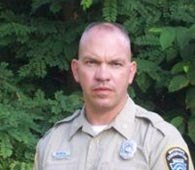 Tom Burrell began his career in maritime enforcement in 1992 when he enlisted in the U.S. Coast Guard, following his service in the USMC Reserves during Desert Storm. He would see service in Key West, (Fla.) Norfolk, Va., and New York City, both afloat and ashore with duties, which ranged from drug and alien interdiction to recreational boating safety. During this time he would serve in a variety of positions including boarding team member, boarding officer, boat crew, coxswain and master helmsman. Achievements include Coxswain “C” School Honor Graduate, numerous humanitarian service awards and involvement in several high profile joint operations — including the security for JFK International Airport during the 50th anniversary celebrations of the United Nations.

In 1997 he left the USCG to pursue a position with the Pennsylvania Fish & Boat Commission as a Waterways Conservation Officer, a position that would include posting in both the rural north central region, and later in suburban Philadelphia. In 2002 he was promoted to patrol supervisor for the South Central Region and received the PA DUI Association “Top Gun” Award for his efforts in apprehending boaters who were under the influence of alcohol or controlled substance. Tom is currently a Captain assigned to Headquarters. He is also an instructor in the areas of firearms, hand gun retention, handcuffing, OC spray, First Aid & CPR and Boating Under the Influence Detection/Apprehension.