How to have a stable law enforcement marriage

How to buy firearms (eBook)

How to buy specialty vehicles (eBook)

Why standards matter in training

How to buy vehicle equipment (eBook)

The hazards of policing in the political season

On Language, Communication, and Leadership

How to maximize your subject interviews

When I began teaching Interviews and Interrogations as a post academy advanced class, I was given a list of teaching objectives in a legal block that included Miranda and other court rulings that effect the interview environment. I figured the legal block would be short. After all, this is something we do every day.

I was surprised at how many of my “on the job” students were confused about some of the restrictions and rules imposed on us by the court. My legal block grew as I developed my course. It is not that we are ignorant or lazy. It is that the rules are confusing and convoluted. It is like a maze that leads to the prize; the prize being the confession. Reading Miranda was not the big problem — it was all the things that surround the interview after Miranda.

Many years, many classes, and many students later I find we still get a little confused by the rules. We all know you cannot hit, threaten, or promise a subject a lesser charge for the confession. We have to treat them nice, similar to the story in the three bears, “Not too hot, not too cold, it has to be just right.”

We currently are getting rulings that toss out cases due to time constraints. If you are in the room for many hours conducting a harsh interrogation, you have a good chance of losing anything you obtain. Those issues are not a part of this article. I do discuss it more in my book “Interview to Confession The Art of the Gentle Interrogation.” The bottom line is to use the right techniques to get the subject to share with you their information.

Miranda is simple — it must be read if the following conditions are met: The subject is in custody (not free to leave) and you are going to ask incriminating questions.

If these two conditions do not exist, you do not have to read the warning.

From a practical standpoint I don’t recommend reading the Miranda warning as soon as you make the arrest, not unless you are on a TV show — that is for effect during the show. I recommend you take the subject to the place you want to do the interview, get the cuffs off, get them something to drink and chit chat. As long as the chit chat doesn’t concern the case, you can talk.

In other words do not say, “Well Billy, that place up at the lake where you go fishing, is that were you buried the body?” Get the rapport going and then read the warning. If you have a rapport, the chance the subject will talk to you is greater. Remember, people do not want to talk to people that are not nice to them. Miranda is a one shot deal; if the subject asks for an attorney, you are done.

The other condition is custody. If the subject is handcuffed and sitting in the back of the car, it is pretty clear they are in custody. It is the subtle custody that gets you in trouble. When you are on the scene, point at a person, and say “Hey, you, come here I want to talk to you,” that person must do what you say. When you tell someone to “come here” they are required by law to obey you. I recommend you take the nice approach, “Excuse me sir, could I speak to you for a moment?”

When they come over to you, they did it voluntarily, responding to your request “Could I...?”

If they don’t come over, you can always tell them. Most people will come over and talk to you because you are law enforcement. Not because you told them to, but because it is the right thing to do. Like my daddy told me when I was young, “When I ask you to do something, consider it an order, I’m just being polite.”

There are several cases dealing with what establishes custody and I list them in the sidebar article to the left of this coulumn The courts have established several rules governing custody, which provides us with a good idea of where the line is. The court has established that a traffic stop is not custody; they call it a detention. The idea is, we will give the subject a ticket and let them go. If you charge the subject with a criminal offense, they are in custody. What the subject “thinks” does not establish custody. The officer must do or say something to indicate the person is in custody, such as: putting them in cuffs; tell the subject they are under arrest or stating they are in custody; locking them in a room or car and refuse their request to be let out.

Murphy ’s Law says, “If anything can go wrong, it will.”

You don’t want to mess it up in court, even if you did it right on the street. Below is the Miranda warning I recommend. I put this stuff on a tw-sided card officers can carry with them. One side is the warning; the other side is set up to document the time and the case. You can have the cards made at an office supply store the same way you purchase business cards. You can also buy blank cards set up for a computer printer and make your own. When you file your report, attach the card or put it in evidence. Many agencies supply the card, if they don’t, make your own.

SIDE ONE: Constitutional Rights

After each point on the card, ask the subject, “Do you understand?”

Have them verbalize an answer so it is clear they understand; don’t accept a nod. I have included the fifth warning suggested by the court, but not required, except in two states. The fifth warning is, “You can exercise these rights at any time.”

I like it — it is the money-back guarantee. It lets the person know they can always clam up and ask for an attorney. Just like the department store. You are more inclined to buy if you have 90 days to bring it back.

One last thing to remember is to clearly document the circumstances surrounding the custody and the questions. It will not matter what you say in court; it must be written down. The courts have ruled many times in many cases “If you don’t write it down, it did not happen.”

The following is a synopsis of the points made in cases that establish the proper procedures and warnings required when interviewing suspects in criminal cases. It is not a complete discussion of the cases; however, it can act as a reminder if you are familiar with the overall rulings. After the list of rules, I have included a schematic of the process after the arrest. In a recent class a student, Jason, stayed after class, trying to get a clear understanding of the rules governing reading the warning as well as what you can and cannot do.

To make it clear, I drew this schematic on the board. It really seemed to help so I polished it up and made a handout for the class. My students have found it helpful as a map to the Miranda labyrinth to get to the prize; the legally acceptable confession. I hope it will help you as well.

If you find these aids helpful, you have permission to copy and use them on the street or in local training. These issues are more fully discussed in my book, “Interview to Confession, The Art of the Gentle Interrogation.” The short version is included in the “Investigator’s Pocket Guide To Interviews and Interrogations.” 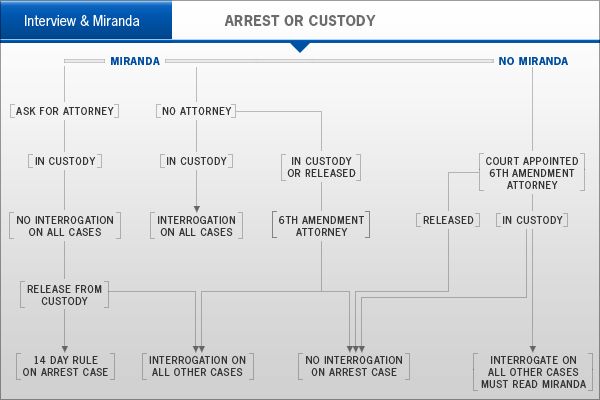 John Bowden is the founder and director of Applied Police Training and Certification. John retired from the Orlando Police Department as a Master Police Officer In 1994. His career spans a period of 21 years in law enforcement overlapping 25 years of law enforcement instruction. His total of more than 37 years of experience includes all aspects of law enforcement to include: uniform crime scene technician, patrol operations, investigations, undercover operations, planning and research for departmental development, academy coordinator, field training officer and field training supervisor.

Md. man killed in shooting that injured 2 LEOs was wanted for shooting at grandfather of his kids

The massive growth of video evidence: What police administrators need to know