Action vs. reaction: The shoot-first fallacy

The case of the flattened hat

How to buy prisoner transport and squad inserts (eBook)

How to have a stable law enforcement marriage

How to buy firearms (eBook)

Use this resource to prevent blue-on-blue deaths

We continue to see an increase in the number of officers who carry concealed when off duty. Further, the number of retired officers carrying a gun (under HR-218 / LEOSA) is continually increasing. That’s a good thing in my opinion. I like having good guys with guns wandering around in our midst.

Although it’s rare — contrary to countervailing opinion, off-duty and retired cops draw and fire a gun very, very infrequently — circumstances do arise in which that LEO will view conditions to be so desperate they are compelled to engage a deadly threat.

When that happens, the next folks arriving to the scene are generally the uniformed police officers responding to a “shots fired” or “man with a gun” call.

This is where truly bad things can happen.

Accidental Blue-on-Blue deaths are a real concern — my friend and PoliceOne colleague Dick Fairburn and I have been discussing this matter for years. We recently revisited the topic.

“As more and more retired officers get comfortable with daily concealed carry, we increase the odds they might stop a shooting event in its earliest stages. At the same time, we increase the risk factor due to misidentification,” Fairburn told me.

“Don't forget about the possibility of ‘Blue-on-Gray’,” Fairburn added. “That guy who dropped the active shooter might be a retired cop.”

One way to help ensure that you’re easily identified by arriving uniforms is to have a highly visible indicator on your person.

In 2012, Sergeant Ward Smith — supervisor of the Kansas City (Mo.) PDs firearms training section — completed a two-year study highly relevant for off-duty, undercover, and other plainclothes officers who become involved in a hot crime scene while armed — as well as for uniformed personnel who respond to such scenarios.

“When you’re in street clothes with your gun out in an enforcement situation, where you place your badge — at your beltline or hanging from your neck — may directly affect your chances of surviving when you’re confronted by a responding officer who does not personally recognize you,” Smith said in this column by Chuck Remsberg.

A center-mass display of your badge is better than the belt-line. One step further than that might be the DSM banner from DSM Safety Products.

The brainchild of retired SWAT Sergeant Mike Lessman, the DSM banner is a brightly colored, reflective banner you pull from a pouch on your belt to drape across your torso, “Miss America” style. Fairburn and I are both big fans of this thing.

Together — with the big time help of my friends in the graphics department — Fairburn and I have developed a poster you can pin up alongside other intel bulletins and safety alerts on the cork board in your squad room. Click the link and/or the image below, and a new tab will open with the full-size poster. Mouse over the the bottom-right corner of your screen and you will see icons for saving and printing the document.

Stay safe out there my brothers and sisters. 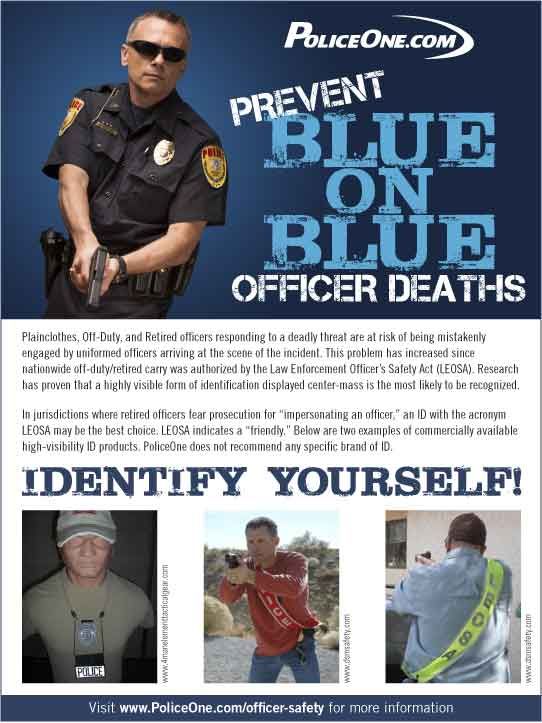 Doug Wyllie is a senior contributor for PoliceOne, providing police training content on a wide range of topics and trends affecting the law enforcement community through PoliceOne's Policing Matters podcast.

Ready for Anarchists and Antifa: How Vancouver LE prepped for the Patriot Prayer and Trump Rally

A cop's guide to the supplies you will want on patrol

Video: Man charges at Texas LEOs with knife after being shot 7 times