How to buy police drones

The Science of Training

Survey: Is proactive policing slowing down?

Survey of officers provides insight into today's environment for LE

President Barack Obama says there’s no evidence it exists and Attorney General Loretta Lynch agrees. James Comey — the director of the F.B.I. — believes it does exist. Chuck Rosenberg, the director of the Drug Enforcement Administration, thinks it’s for real. Ronald Davis, Director of the DOJ Community Oriented Policing Services, testified at a Senate hearing that the suggestion of it “insults the nation’s police officers.”

So, just what is “it” that has some of the highest powers in the nation at odds?

“It” is the “Ferguson Effect.”

How the Ala. attack on a cop is an alarm bell about 'deadly hesitation'

When force is necessary to ensure an officer’s safety, officers must use it — without hesitation — regardless of the perceived ramifications of the aftermath.

The Ferguson Effect is a widely-debated hypothesis that law enforcement officers are slowing down enforcement efforts due to the social outrage concerning perceived rampant police brutality. The theorized slow-down has been anecdotally linked to an increase in crime and criminal activity in some areas (disagreement exists here as well).

However, the FBI crime statistics show an uptick — albeit small — within the first six months of 2015 compared to the same period in 2014 (1.7 percent nationally). Is this an indicator of things to come? Only time will tell.

Given this debate, it appeared prudent for an exploratory national survey to be conducted to garner empirical evidence on whether officers are slowing down on proactive enforcement. Also relevant, if a work slow-down was found to exist, was to attempt to correlate potential causal factors.

To that end, Blake Consulting and Training requested input from national law enforcement (patrol level only) in the form of a short survey. A statistical review of the results are partially analyzed here. When analysis is complete, the study will be submitted for peer-reviewed publication.

Method
Officers were contacted through law enforcement related social media and cooperating law enforcement executives. The survey was restricted to law enforcement patrol level officers who were requested to answer 19 questions (Likert Scale). We received 489 responses from small suburban (25 officers) to large metropolitan departments (3,000+) across the nation. The officer’s ages ranged from 21-65 years, with anywhere between less than five to 30 plus years of employment.

Results
The first clear answer was whether patrol level officers believed proactive patrol efforts made a difference in regards to criminal activity:

The survey used a Likert scale to provide officers the ability to discuss their increase or decrease in proactive policing over the last year. The results are concerning: 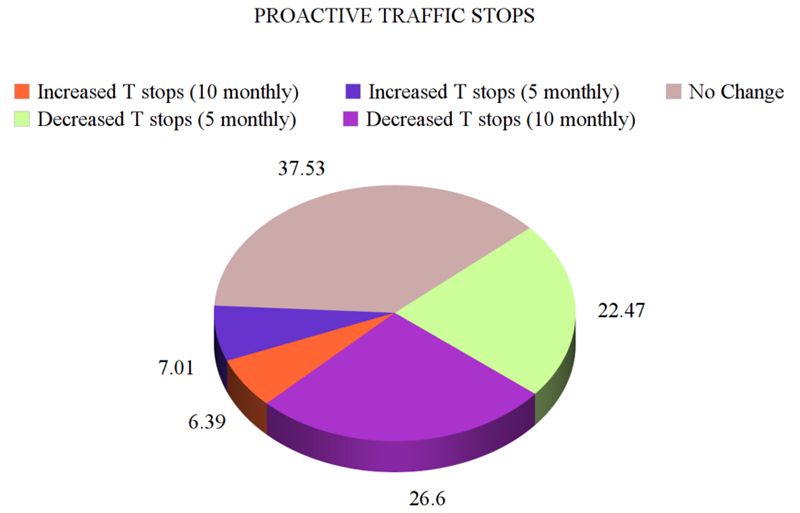 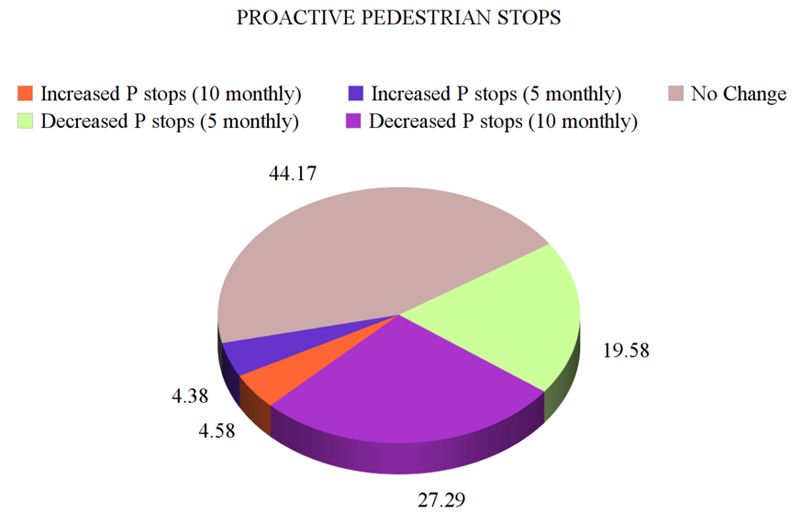 Officers were asked their opinions as to whether or not they believed crime had increased or decreased in their jurisdiction. Again, the results should cause some concern:

In the event of a trend in work increase or work decrease presented itself, the survey asked several other questions in regards to potential influences on performance. The results are as follows: 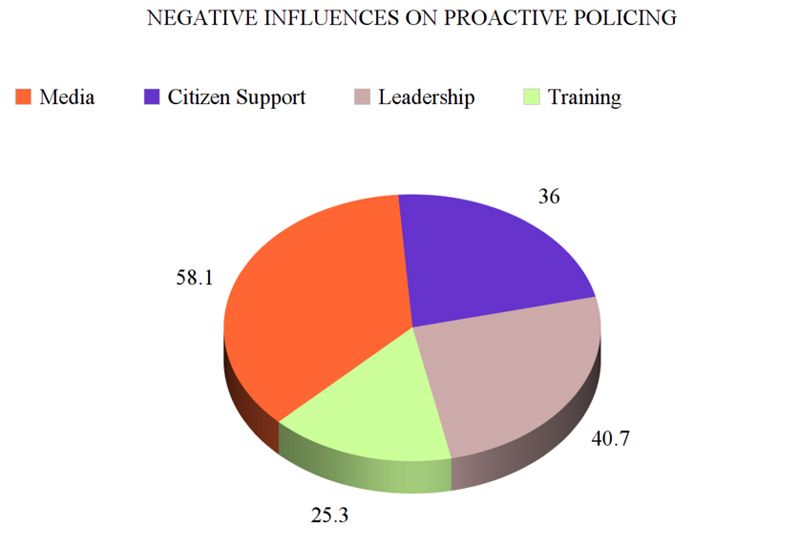 *Chart equals over 100 percent as these are overlapping causal factors.

Conclusion
The data from this study provides significant evidence of a decrease of proactive policing across the nation. Study data also provides significant correlations between leadership, media, community relations, and training to their individual effects upon decreased proactivity. It can only be anecdotally derived from the results that the effects of the causal factors are overlapping in part or in whole.

Discussion
This exploratory study provides data that should be concerning to police executives as well as society based on the potential long term effects of decreasing proactive policing. According to a U.S. Department of Justice scientific review of more than 500 crime prevention programs, proactive policing in the form of hot spots, specialized units, and continued incarceration of repeat offenders has an evidence-based foundation for what works in decreasing crime. Proportionally, according to a New South Wales Justice Department document, increases in crime are partially caused by; crime prone places, criminal opportunity, and lax / insufficient law enforcement. These facts provide the foundation of belief that a slow-down or stoppage of proactive policing may have long term effects. Those effects may be becoming visible (1.7% increase in crime nationally).

Recommendation
The Department of Justice, research organizations (IACP / PERF), and individual law enforcement agencies across the nation should evaluate whether law enforcement officers in individual jurisdictions are decreasing proactive policing and determine through statistical analysis of crime rates (e.g.: change from year one to year two) whether correlations exist. Further, if there is a correlated finding between the decreases in proactive policing and increased crime rates, the next step would be to determine the causal factors and create a plan of corrective action circumscribing evidence based methodology.

David Blake is a retired California peace officer and a court-certified expert on human factors and the use of force. He has significant experience teaching use of force and human factors psychology to law enforcement officers in several states. David has graduate and undergraduate degrees in criminal justice and psychology. He has published both opinion and peer-reviewed research on the application of human factors psychology to first responders and their operational environments. David is currently a doctoral candidate conducting research on the application of human factors to officer-involved shootings. He is the proprietor of Blake Consulting and Training.