How to buy fentanyl protection and detection products (eBook)

By Liz Hull
The Daily Mail

ROCHDALE NORTH, U.K. — When police put an appeal for a wanted teenager on Facebook, they were hoping for tip-offs from the public. They probably didn’t expect the criminal himself to reply, saying: ‘Catch me if you can.’

But the officers had the last laugh when they arrested Sam Greenwood just 12 hours later...and added their own riposte: ‘Caught you. Do not pass Go, do not collect £200, go straight to jail.’

Police wanted Greenwood, 19, for breaching the terms of his release after he was locked up earlier this year for driving while disqualified and with no insurance. Greenwood failed to heed their advice, but was spotted by officers out on patrol and placed back behind bars.

Full Story: Catch me if you can! Criminal taunted police on Facebook... and just 12 hours later they did 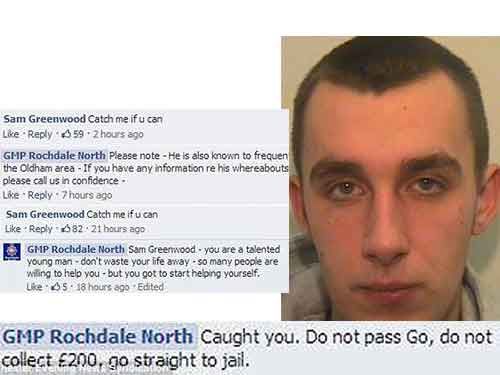 Deputies: Couple had sex in patrol car after arrest