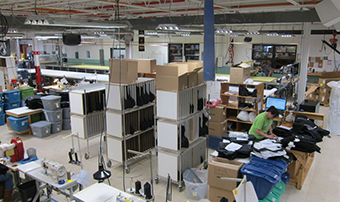 Lt. Brian Murphy was shot 15 times by a terrorist at a Sikh temple in Oak Creek, Wis., in 2012. He survived because he was wearing a bullet-proof vest made by Armor Express Inc., by far the largest employer in the little town of Central Lake on the Chain of Lakes river and lake system in northwest Michigan.

Murphy retired from the police force and now runs the Saves Program for Armor Express, which honors police officers who survive being shot on duty and offers them support and counseling.

When Boston police hunted down the two marathon bombers in 2013, they were wearing Armor Express body armor.

When Capital Police killed the shooter after coming to the defense of members of Congress in Washington, D.C., in June, they were wearing Armor Express equipment, too.

Police departments around the state — including Grand Rapids, Traverse City, Troy, Sterling Heights and Southfield — and around the country wear bulletproof vests made by Armor Express. Police dogs wear their vests, too, as do international police forces and military units.

It seems improbable that a town tucked along a back road, miles away from the region's tourist spots, would be a major supplier to police and all branches of the U.S. military.

It would have seemed highly unlikely, too, to company President and CEO Matt Davis when he founded the company in May 2005, bucking the odds, advice, common sense and even his own doubts.

The year before, his father Richard Davis, who had founded another maker of bullet-proof vests, Second Chance Body Armor, in 1970 and saw it grow to become the largest maker of armor in the U.S., had gone out of business amid scandal.

If YouTube and the Internet had existed in 1971, Richard Davis would have achieved worldwide viral fame. He founded the company in Romulus, and in a pitch for business the next year to the Detroit Police Officers Association, he shot himself in the chest with a .38-caliber bullet, leaving only a bruise.

Cops lined up cash-in-hand to buy his vests. In 1974, Davis moved the company to Central Lake, his grandmother's hometown. He had spent many happy summers there.

In 2004, Davis was forced to recall 120,000 vests and file for bankruptcy after the death during a traffic stop in 2003 of Tony Zeppetella in Oceanside, Calif., who had been wearing a Second Chance vest made from a new material called Zylon.

Zylon was made by Toyoba Co., a Japanese company. "The data Toyoba provided showed Zylon was fine, but it was a faulty product. The fiber proved to be prone to early degradation," Matt Davis said.

Davis was a national sales manager during the recall. He took a company with nearly $100 million in revenue through bankruptcy.

"It was baptism by fire," Davis said. "It would have been easy to walk away. I was considering other options, but my dad encouraged me to start a new company. He absolutely was the driving force." Davis's dad stayed retired and had no role in the new company.

Davis said he had three objectives in starting another body-armor company, though the move seemed destined to fail to many. He wanted to restore the family name in the industry. "We had been the dominant brand in the world," Davis said. He wanted to bring jobs back to Central Lake — Second Chance had employed 200 — and he wanted to make a living.

He started it up just a week after Second Chance sold its assets. 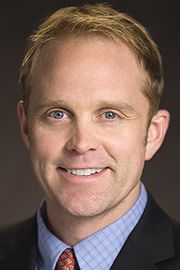 Davis had been a finance major at Michigan State University in 2000. After a stint working in finance in Arizona, he joined his father's company in 2002.

"He had me do every job in the company. I swept floors. I answered the phone. I cut material. I did customer service," said Davis.

In February 2003, he got in a pickup truck and toured the country, calling on sales reps and customers and appearing at trade shows. He also called on customers in the United Kingdom, Germany and India. Around the time Zeppetella was killed, he was named national sales manager.

"By the time we began building Armor Express in 2005, I had a lot of contacts in the industry," he said.

Davis knew servicing cops was a relationship business, and relationships had been his forte.

He was just 29 when he founded the company with a small group of colleagues. They worked for months in a three-bedroom cottage before making their first sale at a trade show. They were unable to find investors and were desperately short on cash.

Davis said he hit a lottery of sorts in 2006 while on a plane leaving Detroit's Metro Airport. The guy next to him asked him what he did for a living. He told him the story of death and rebirth. The guy was intrigued, and two weeks later, Davis flew out to California to pitch the guy and some of his former law partners for money.

They ended up writing checks totaling $2 million. Davis was happy to give them 35 percent of the company in exchange. (In 2015, Armor Express raised another round of financing to fund growth, what he described as a significant round of money he is prohibited from disclosing terms of, through a private placement from a family office and private-equity firm.)

Today, Armor Express employs 157 and revenue is approaching $30 million. It occupies four buildings in town, a 50,000-square-foot factory, an administration building, an R&D center and a warehouse.

In addition to employees, Armor Express uses what it calls the Sew at Home Network, farmer's wives or hobbyists who have sewing machines and are eager to do piecework, sewing component materials for the outer shell of the vests.

Davis says his armor is worn by 800,000 police officers at 18,000 departments. "One in every five officers in the country wears Armor Express," said Davis.

Each vest is custom-made for each officer to ensure proper fit, at a cost that ranges, depending on style and features, from $600 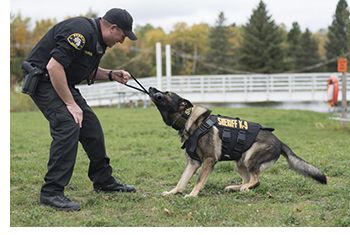 The outside can come with pockets and designs vary greatly depending on user needs.

Inside are the ballistic panels that do the heavy work. The are generally made up 10-12 layers of thin sheets of polymer. Armor Express uses Kevlar, the most famous brand for what is generically called a para-aramid fiber, with five times the strength of steel and created by accident by a DuPont chemist in 1965. The company also uses another para-aramid called Twaron, made in the Netherlands, and a lightweight fiber made by a variety of providers called ultra-high-molecular-weight polyethylene.

The powerful straight-ahead force of the bullet, which would puncture the body and lead to injury or death, is turned into lateral forces by the fibers in the layers of material in the vest.

In 2010 and 2016, Armor Express was named government contractor of the year by the state of Michigan.

In 2016, the company won a seven-year, $93.8 million contract from the Department of Homeland Security to provide vests to more than 90,000 officers with U.S. Customs and Border Protection, U.S. Immigration and Customs Enforcement, Transportation Security Administration and other federal agencies.

About Armor Express
Armor Express is a leading manufacturer and distributor of high-performance body armor systems. Founded in 2005, the Company has grown to become one of the largest providers of soft and hard armor products and accessories, serving the domestic and Federal law enforcement market, U.S Military and America's allies around the world. Through its strategic partnerships with technology innovators and its unwavering commitment to advance research & development, the Company's customers benefit from state-of-the-art protective solutions and best-in-class service. For more information, please visit www.armorexpress.com.

Want to know more about Armor Express?
Get info