BodyWorn: Body Camera with Gunshot Detection, When Firing or Fired Upon.

From BodyWorn by Utility, Inc.

Cops weigh in: How police agencies are training LEOs on the use of body cameras

Navigating the complexity of BWCs is a challenge police departments continue to face. If you’re in need of BWC training for your department, PoliceOne Academy has several online courses available, including “How to Implement a BWC Program.” Start your path to becoming an expert by visiting PoliceOneAcademy.com and submitting a request to learn more.

Body-worn cameras (BWCs) are the future of policing. There’s no question that every police officer in America will eventually be outfitted with the technology. As agencies look toward this inevitable future, it’s important to consider the level of training required to ensure successful use of the devices.

Policing in the Video Age

P1's yearlong special focus on video in LE aims to address all facets of the topic.

In a survey we conducted as part of the third installment of our “Policing in the Video Age” special coverage, we discovered that two out of three officers found the training they received on the use and deployment of BWCs to be insufficient. Additionally, nearly 84 percent of those who took the survey said they only received zero to two hours of training on the use of their BWC. As a result of these findings, we set out to take a deeper look at how agencies are handling their training.

How much initial and ongoing BWC training should departments conduct to adequately equip law enforcement to police in the video age? We asked our readers to weigh in, and received responses from 86 officers in leadership positions and 110 line officers. Take a look at the results, below. 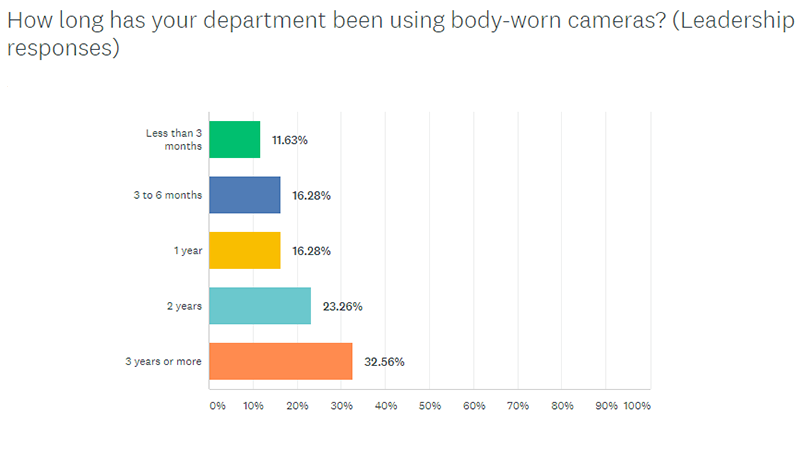 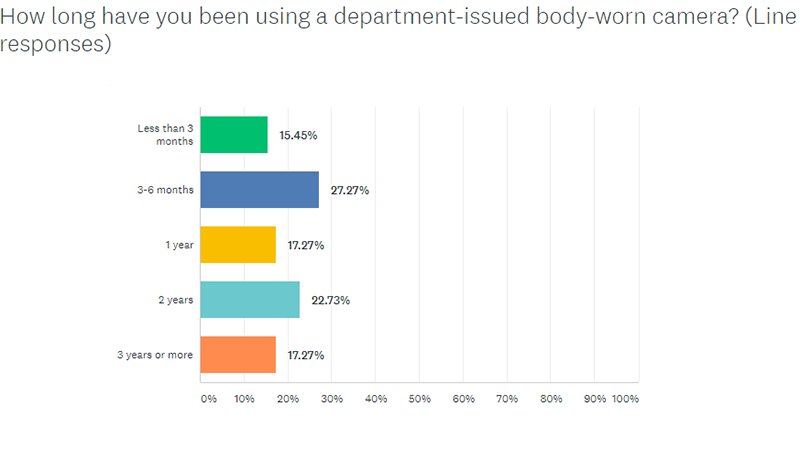 Most officers in leadership positions have used BWCs for three years or more (32 percent) or two years (23 percent). Line staff was more evenly split – with 27 percent in the three-to-six month range followed closely by the two-year range (17 percent). 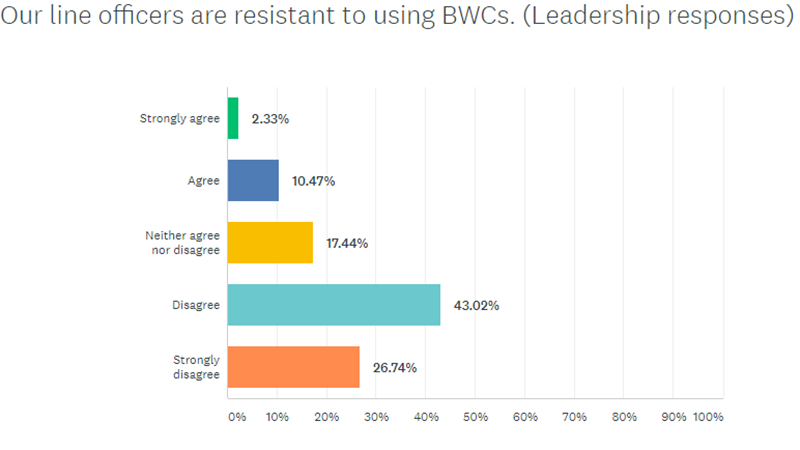 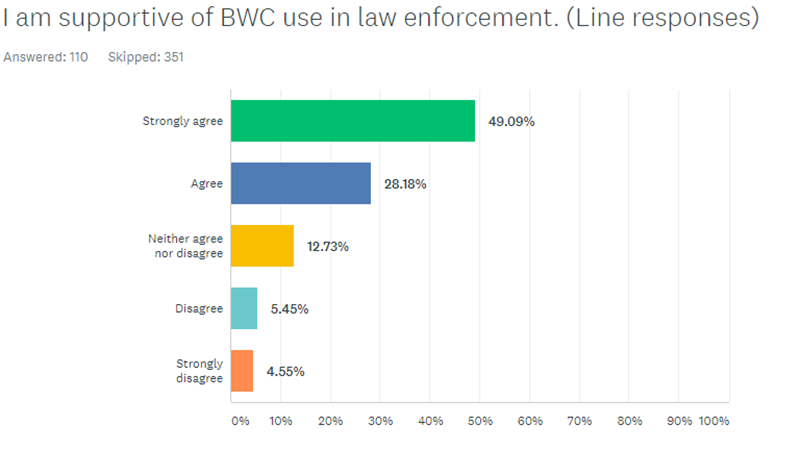 Part of the key to a successful BWC program is buy-in. As evidenced in our survey results, opinion of the technology is mostly positive.  Given that BWCs have played a key evidentiary role in many use-of-force cases and serve as a defense against accusations of misconduct, this widespread acceptance of the tech is unsurprising. 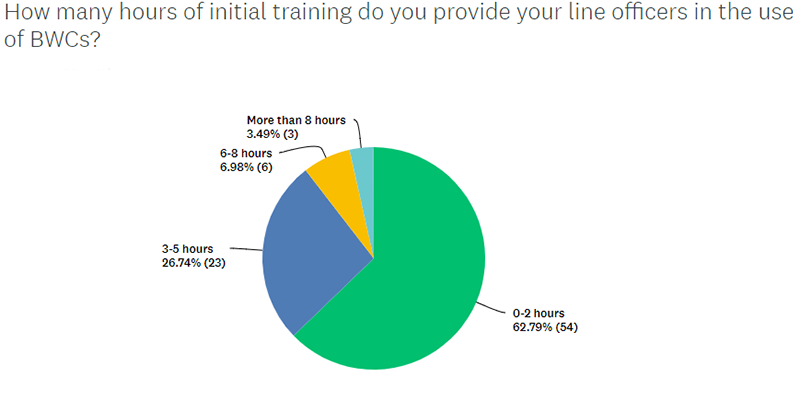 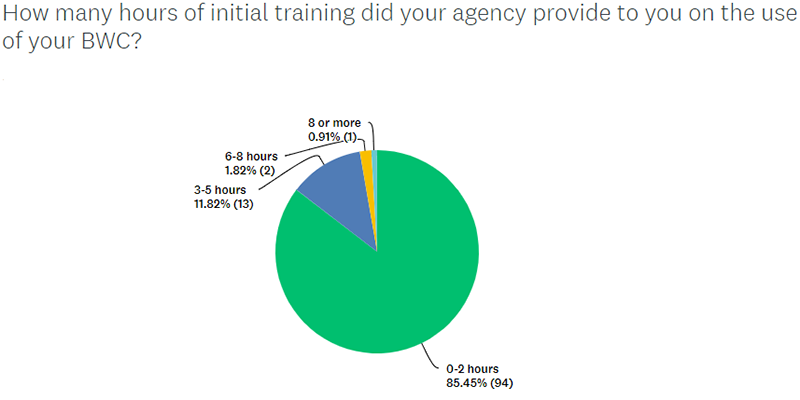 Mirroring our results from the previous “Policing in the Video Age” survey, the vast majority of agencies appear to be providing officers with zero to two hours of initial training on the use of their BWC.

Most survey participants in leadership positions said their agency does not hold refresher training for officers on the use of their BWCs (66 percent). 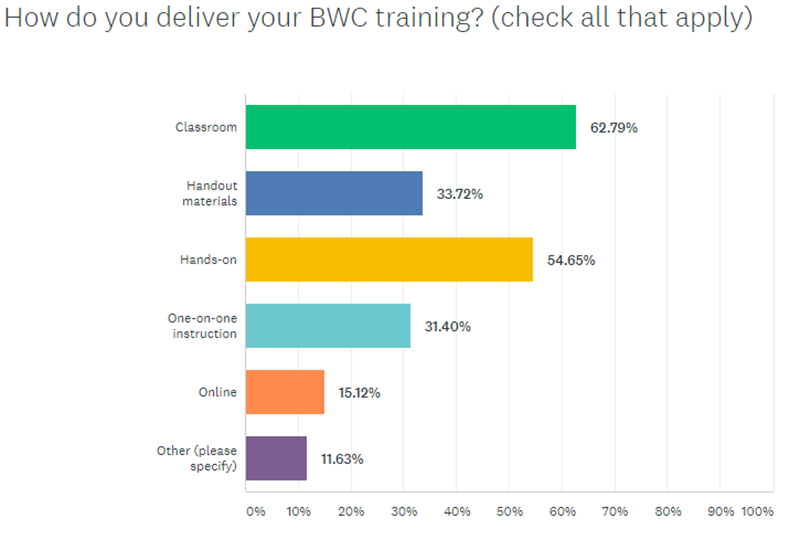 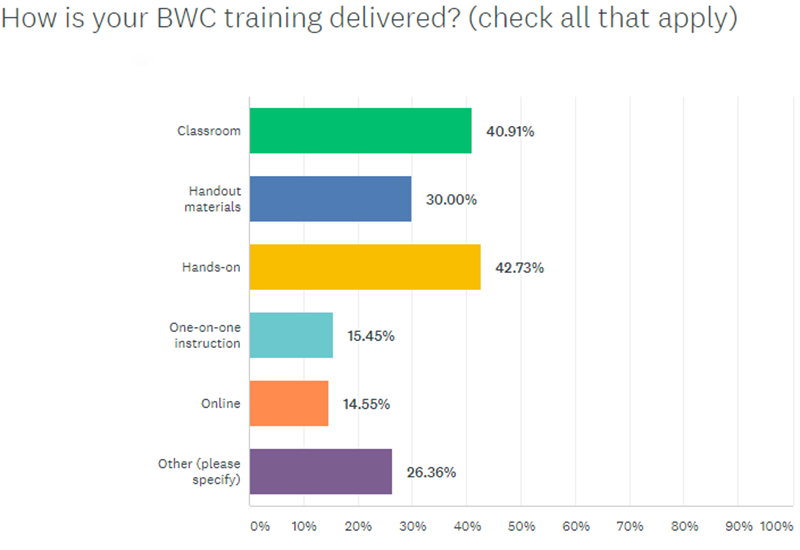 How agencies deliver their BWC training can be as important as the frequency and length of training. For both leadership and line staff, classroom and hands-on training were the two most common responses.

The vast majority of line officers (84 percent) said that hands-on training is the most effective.

What do you wish your BWC training had focused more on?

When asked what they wished their training had focused more on, the most common answer from line officers was clarity on when the cameras should be activated. Many pointed out grey areas, such as contacts with juveniles or victims of serious crime, that weren’t sufficiently addressed during training.  Some officers said their BWC policy was overlong and needed to be simplified.

What was the biggest training challenge you faced while implementing BWCs?

Despite the widespread acceptance of the devices reported earlier in the survey, one of the most common challenges in implementing BWCs, according to our leadership survey participants, was buy-in. Interestingly, some of this stemmed from generational issues (older officers were more reluctant). Other common challenges were consistency in turning the devices on and proper tagging of videos. 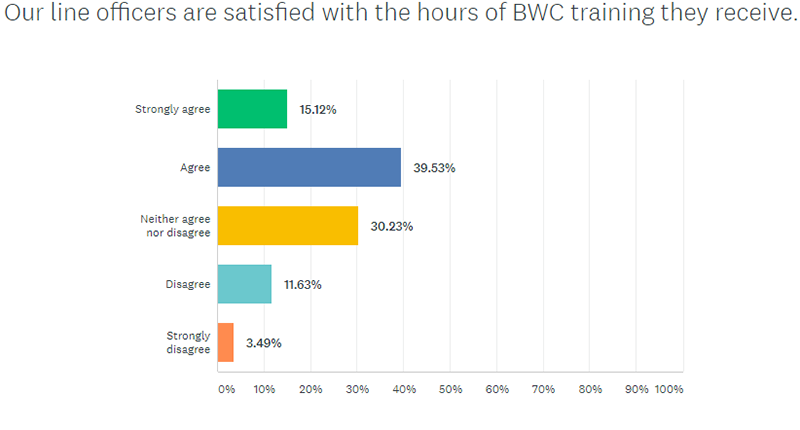 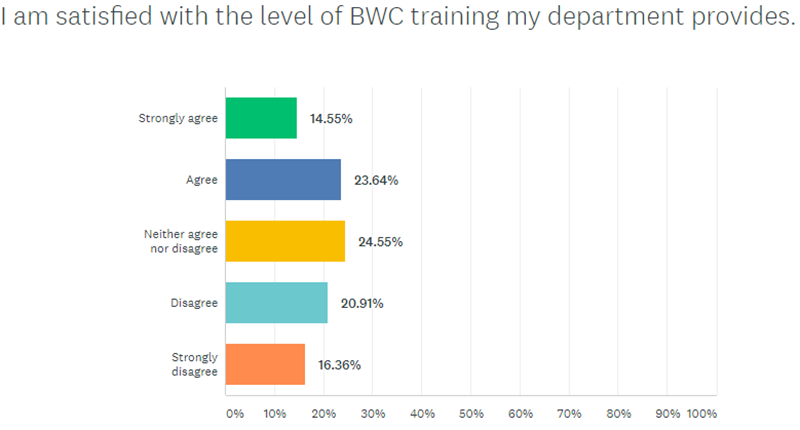 Turning the camera on

Many departments struggle with the question of when to turn BWCs on. While the majority of survey respondents agreed that their policy was clear on this, a higher percentage of line officers disagreed. 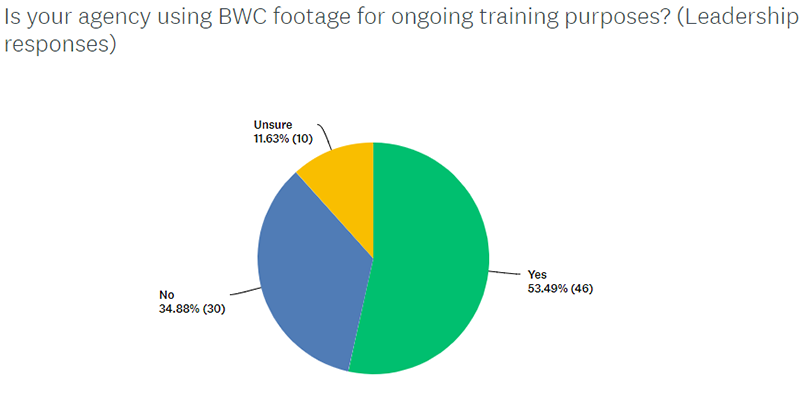 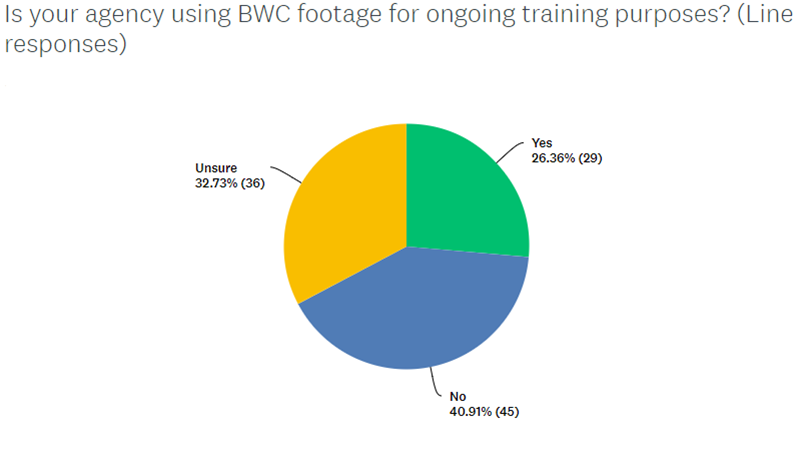 Most participants said they used the footage for after-action analysis.