Over the course of five weeks in May and June of this year, Crime Tech Solutions and Case Closed Software conducted a short, online survey of US-based crime and intelligence analysts. We wanted to understand how law enforcement agencies are adopting cloud-based or Software-as-a-Service (SaaS) software solutions as part of the fight against crime.

We also wanted to get a sense of which software categories were currently being utilized via the cloud, and what the future holds in terms of future adoptions.

The anonymous survey had almost 200 respondents, from agencies varying in size from less than 15 sworn officers, right up to some of the largest law enforcement agencies in the country. The results were surprising. Here’s what we learned: 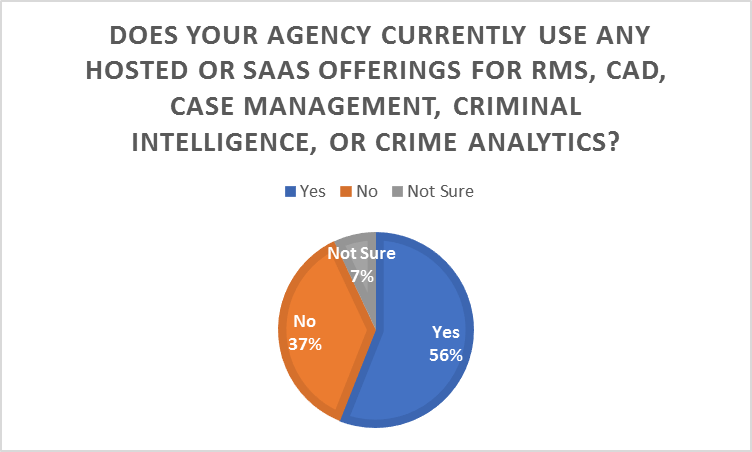 The results to the above question indicate that well over half of all agencies currently utilize SaaS or cloud-based software offerings for core functionality. This result ties in well with previous surveys which have indicated that upwards of 60 percent of law enforcement groups utilize the cloud in some meaningful manner. 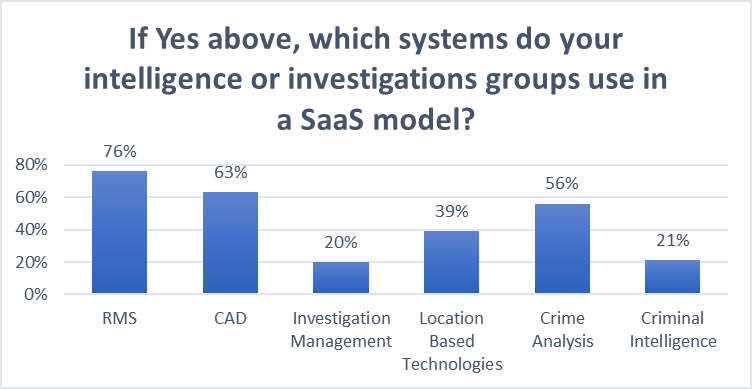 Of the agencies that currently utilize cloud offerings, Records Management Systems, Computer Aided Dispatch, and Crime Analysis were the most common categories. Geospatial and Location-Based Technologies were also popular categories for cloud consumption. Interestingly, barely one in five agencies had chosen SaaS for either criminal intelligence management or investigation management. 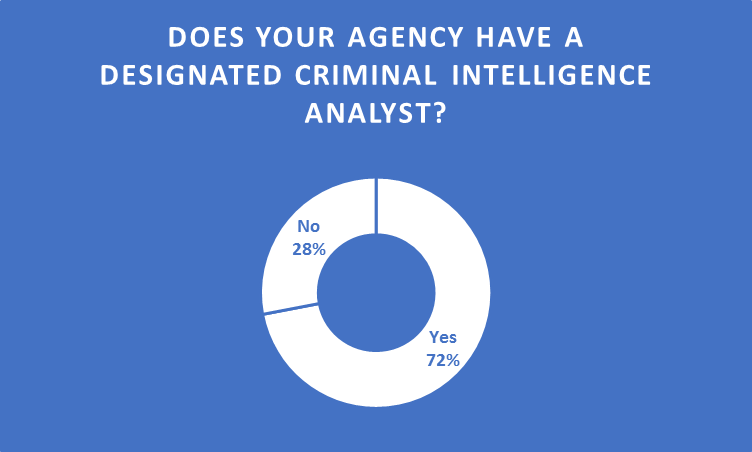 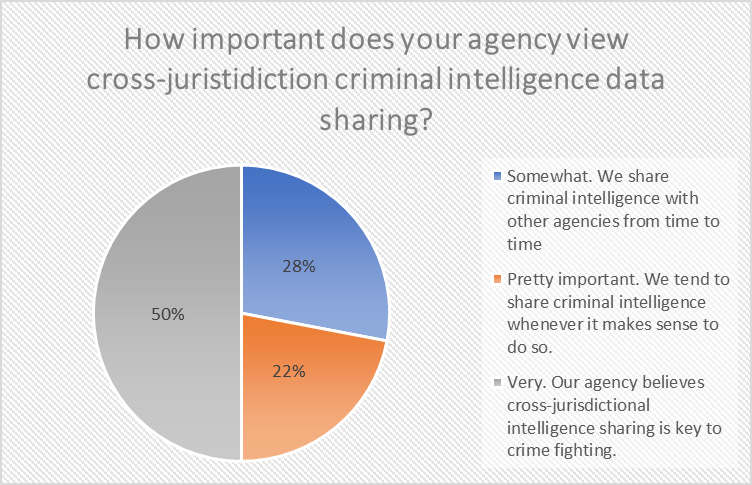 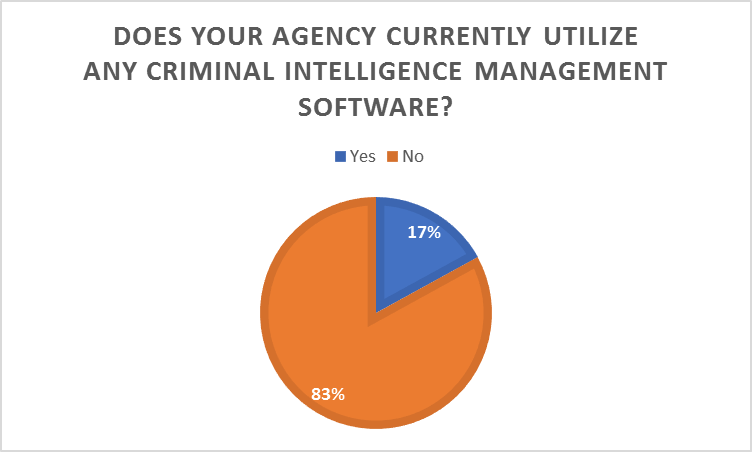 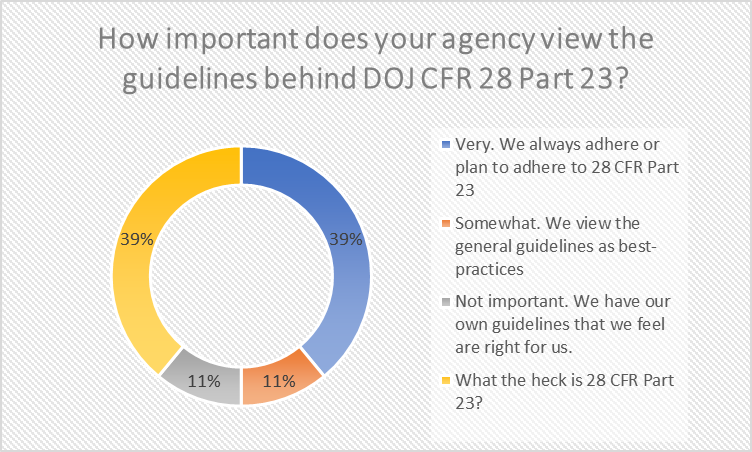 When it came to understanding how agencies view Code of Federal Regulations 28 Part 23, results were mixed. 28 CFR Part 23 is a guideline for law enforcement agencies that operate federally funded multijurisdictional criminal intelligence systems. The guidelines include specific rules that govern the gathering, storage, and dissemination of criminal intelligence data.

As noted above, 72 percent of respondents indicated that their agency has a full time criminal intelligence analyst. Fully half of the respondents, however, had either not heard of 28 CFR Part 23 or viewed the regulations as “Not Important”. 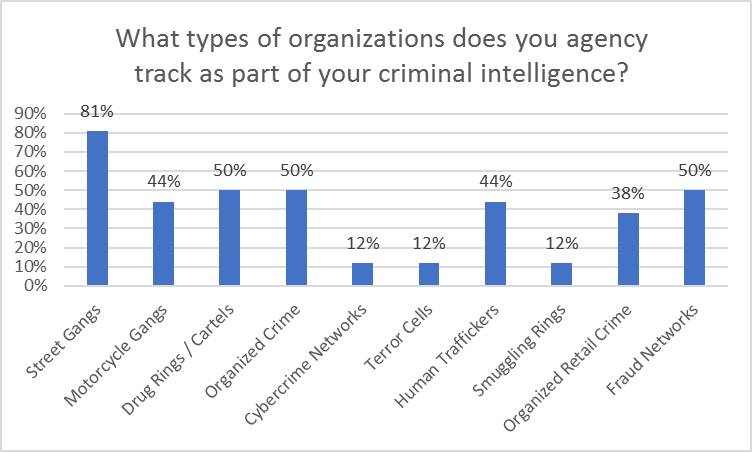 When it came to defining the types of organizations being tracked as part of criminal intelligence, ‘Street Gangs’ were by far and away the leading group, indicated by over 80 percent of respondents. Half of the respondents indicated that they also traced Drug Rings, Organized Crime, and Fraud Networks.  Human Trafficking and Organized Retail Crime were also notable results. The results for Terror Cells were low, but there may have been an overall and understandable reluctance to disclose this information on the survey. 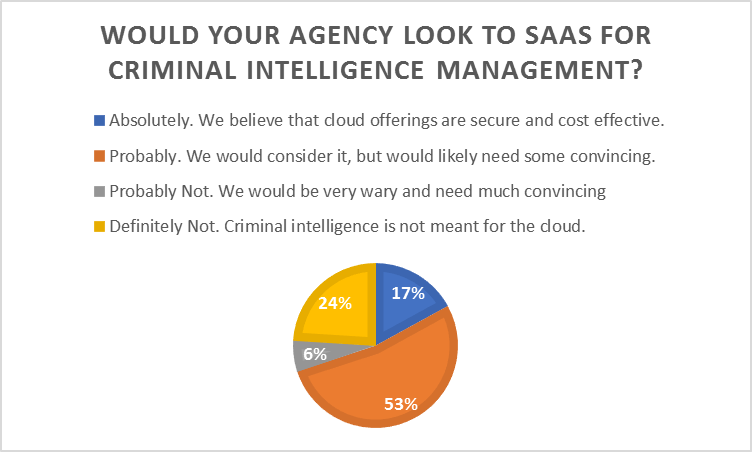 Finally, in a rather unexpected result, 70 percent of respondents indicated that they would ‘Absolutely’ or ‘Probably’ consider using SaaS or cloud solutions for criminal intelligence management. Just 30 percent indicated that they would ‘Probably Not’ or ‘Definitely Not’ consider using a SaaS or cloud offering for tracking their criminal intelligence.

What does it all mean?

The results of the survey seem to indicate that law enforcement agencies are readily adopting cloud-based technologies for heavily-used functionality such as RMS, CAD, and Crime Analysis. Adoption of cloud-based Investigative Case Management and Criminal Intelligence tools lag behind, but the number is higher than expected.

It was somewhat of a surprise to learn that only 50 percent of agencies either adhere to or plan to adhere to CFR 28 Part 23 guidelines. These results may not reflect reality, though, as it would not be fair to expect that rank-and-file analysts would be overly familiar with those guidelines.

Perhaps the biggest surprise was the fact that fifty percent of respondents believed that their agencies would consider a cloud-based criminal intelligence management system. Just a few years ago, it would have been very likely that the results were heavily skewed against it. The advancement of cloud security, coupled with the cost benefits of utilizing SaaS, seem to have law enforcement agencies exploring all options in search of serving and protecting the public.

About the author
Douglas Wood is President and CEO of Texas-based Crime Tech Solutions and Case Closed Software. His companies provide investigation management and criminal intelligence software to law enforcement and other investigative agencies.