PoliceOne recently asked readers if they were capable of turning video evidence into usable intelligence to solve crime. Here’s what we learned.

Despite the advantages of video, whether from in-car cameras or citywide surveillance systems, the volume of video files generated by more cameras presents a tremendous challenge for police agencies.

PoliceOne developed a survey to learn more about the challenges police agencies face when it comes to turning video evidence into actionable intelligence. The majority of respondents were from agencies ranging from 1 to 49 personnel, followed by agencies with 101 to 300 personnel. Currently, 67 percent of respondents use video to solve crime.

Here’s what we learned.

Agencies are capturing video from several types of systems.

The majority of agencies are capturing video from several different sources.

The PoliceOne survey asked respondents to choose all the different systems they currently use to collect video evidence. The majority of respondents, about 69 percent of those surveyed, are collecting in-car videos.

Agencies also are collecting video from third parties, with nearly 50 percent of respondents noting that their video comes from businesses and other commercial entities. 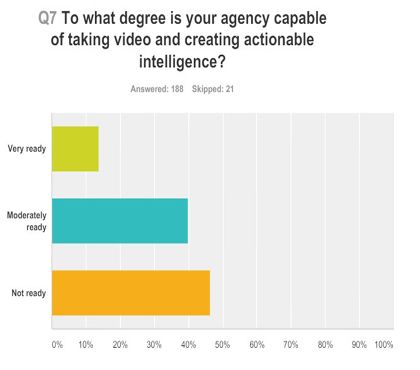 Many police agencies struggle to manage all the video intelligence gathered.

Agencies are struggling to make sense of all of the video intelligence they are collecting.

According to the survey, about 46 percent of respondents felt their departments are not ready to capture video intelligence, analyze it and then solve a crime.

About 40 percent noted that they felt their department was moderately ready, while only a small number of respondents (14 percent) felt their agency was very ready and capable of turning video into actionable intelligence.

Part of the issue may be resources. When asked whether their department had a dedicated IT team or other video professional to sort, manage and create intelligence from video, 63 percent responded “no.”

Instead, the survey found, a single officer often is in charge of managing an entire department’s video evidence.

Video is being used and kept until a court case is concluded.

When and how long to keep video evidence was also asked, with many respondents noting different approaches depending on the video type, the court case and even the state where the video was recorded.

Most respondents, about 43 percent, answered “until a court case is closed” when asked how long they retained the video data.

However, 34 percent marked “other” and offered various approaches and timelines for storing video evidence. One respondent said 770 days but that it depended on the classification of the video.

Another respondent noted that they handle videos differently depending on the type of recording, such as whether it is body-worn, in-car or vice/narcotics.

Finally, one respondent in California noted that general in-car and citywide video is kept for 366 days under the state retention laws (PC 832.18). 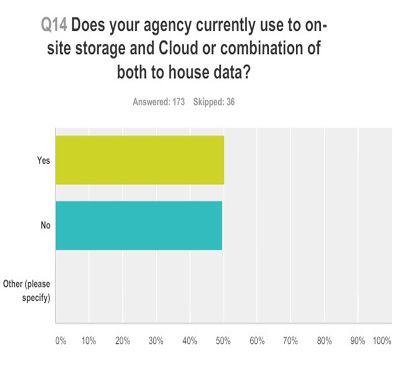 Agencies are split on using the cloud to manage data.

The cloud, when CJIS-compliant, is secure enough to store police data. However, the survey showed there is still some misunderstanding about the cloud and its security.

According to the survey, respondents are split evenly when it comes to using the cloud to store video data securely: 50 percent currently use the cloud for storage and 50 percent do not.

Some of the reasons respondents do not use the cloud vary. One respondent noted that the department doesn’t let him spend money over and above the cost of the hardware.

Another respondent noted that they were a small department and way behind technologically, while another commented that management is not technically proficient enough to understand the need or perceived security issues.

Police agencies still struggle to manage video evidence, whether that video comes from in-car video or citywide surveillance programs. The cloud may be the answer, but education is still needed to dispel the concerns over security.

To learn more about creating actionable intelligence from video gathered at your police agency, visit VION.