George Floyd death: Protests erupt across the US

The city's preparations stem from the looting, violence and arson that followed Gray's death in April

By Colin Campbell
The Baltimore Sun

BALTIMORE —  The mayor activated an emergency headquarters, the city school system warned students against violence and even the Obama administration asked for calm Monday as Baltimore began the wait for a verdict in the first trial of a police officer in the Freddie Gray case.

Mayor Stephanie Rawlings-Blake said she wants business to continue as usual across the city but activated the Emergency Operations Center on Monday morning "out of an abundance of caution." The move put representatives from the city's police, fire, transportation, health and public works agencies in the same room, "coordinated to respond if needed," she said.

See our in-depth coverage of the Baltimore police protests.

Baltimore city schools CEO Gregory Thornton used similar language in a letter to parents, assuring them that the district is "taking every precaution" to prevent a repeat of the April riots. He warned students that "walkouts, vandalism, civil disorder, and any form of violence are not acceptable."

And White House spokesman Josh Earnest urged peacefulness in Baltimore, and said the president was proud of Chicagoans' "forceful but peaceful display of concern" after a video was released showing a police shooting of 17-year-oldLaquan McDonald.

"We're certainly hopeful that as activists and individuals in other communities have similar concerns to express, that they do so peacefully," Earnest said.

The jury began to deliberate Monday afternoon in the criminal trial of Officer William G. Porter, who is charged with involuntary manslaughter, second-degree assault, misconduct in office and reckless endangerment.

Bmore Bloc, which has led marches against alleged police brutality, called for a protest if Porter is acquitted. "If Porter walks, shut it down," the group said on social media. The People's Power Assembly said it would hold a protest and vigil outside the courthouse during jury deliberations until a verdict is reached.

The city's preparations stem from the looting, violence and arson that followed a week of peaceful protests after Gray's death in April. The rioting started with a confrontation between city students and police outside Mondawmin Mall on April 27. Rawlings-Blake's administration was widely criticized as being unprepared.

Baltimore police spokesman T.J. Smith said Monday that police reinforcements already have been sent from surrounding jurisdictions to help the city, in accordance with mutual aid agreements. He would not say how many officers or which agencies had sent them, but added that they were being staged at an off-site location, "not out patrolling the streets," and would be called in only as a last resort.

"The citizens of Baltimore have an expectation for us to be prepared and not be reactive," he said.

The Police Department also activated the Joint Information Center for various community representatives to gather, including those from the tourism industry, the school system, churches and hospitals.

Activists took umbrage at all the security measures, arguing that if justice is served and steps are taken to dismantle structural racism in the city, none of the extra enforcement would be necessary.

The Rev. Cortly "C.D." Witherspoon, president of the Baltimore chapter of the Southern Christian Leadership Council, said he wants to see Porter and the other officers "convicted on all charges, fired from the city payroll so that the family of Freddie Gray isn't paying their salaries and jailed beside the people they've arrested."

"If that sounds extreme, it's been over a decade of neglect to even charge officers [involved in alleged police brutality cases], much less convict them," he said. "People are waiting for the criminal justice system to realize that black lives matter."

Davis' letter was released by the department Monday night. "We will serve as peace keepers for those wishing to exercise their right to protest," Davis wrote. "We will allow the lawful assembly of those gathered to question the government. We will protect homes, businesses, residents, and police officers from harm and mayhem." 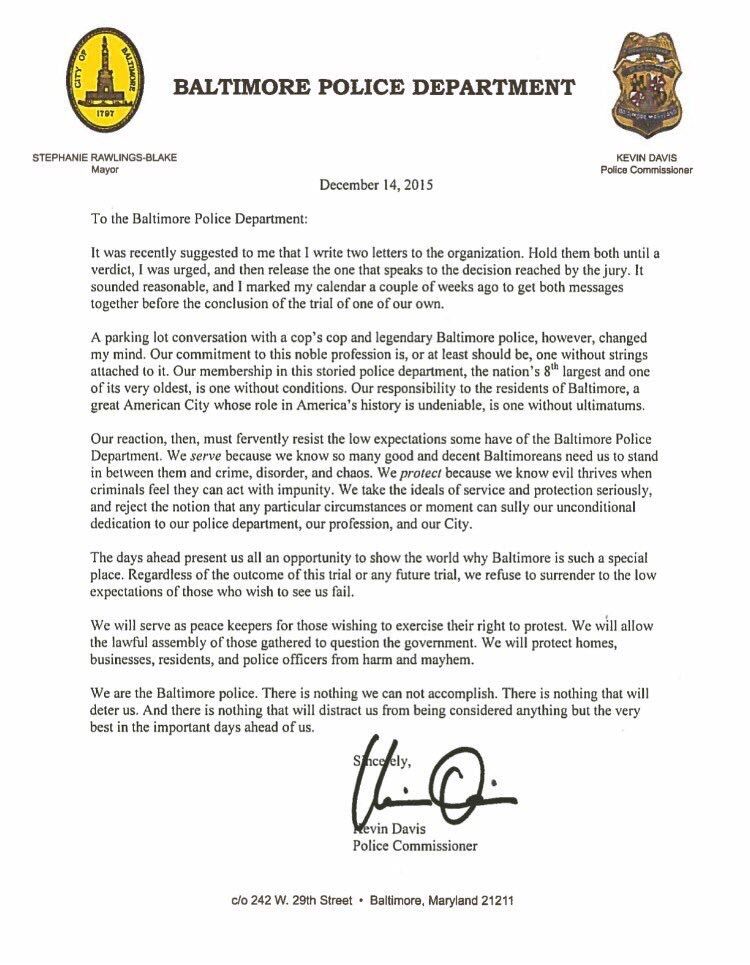 Baltimore County public schools postponed or canceled field trips into the city through the end of the week. The decision was made "as a precaution and in consultation with our law enforcement partners," spokesman Mychael Dickerson said.

In Thornton's letter to parents, he wrote that he is "very concerned about the possibility of civil disorders" after the verdict is announced.

"Students need to understand that we support their right to express their emotions, and that we will facilitate opportunities for them to do so appropriately; however, we need to make it clear that student walkouts, vandalism, civil disorder, and any form of violence are not acceptable under any circumstances and that students who participate in such behaviors will face consequences."

The American Civil Liberties Union of Maryland issued a statement condemning the letter, calling it an attempt by the school system to stifle students' voices and rights as the city enters a "historic moment."

"The school system's letter assumes that studentswould engage in violent acts, assumes that students only want to express their emotions, not rational views about the conduct of police and lack of accountability, and it misses an opportunity to affirmatively engage students who want to be politically engaged on these issues," said Susan Goering, the group's executive director.

Witherspoon also denounced Thornton's warning to students as an "insidious" infringement upon their First Amendment rights to peaceably assemble. He said student walkouts have been used as a means of peaceful protest since Vietnam and the civil rights movement of the 1960s.

"If you want to stop protests," he said, "stop having injustice take place."

City school officials did not respond to questions about what consequences students could face, but released a statement saying: "There is no intent to quell student voice and we have provided our schools with resources aimed at educatingstudents on constructive ways to express their opinions."

Thornton faced pushback in the spring when he sent a similar letter, saying that students who were arrested in the riots would also be disciplined in school.

The letter came one day after Thornton said that about 75 students walked out of Frederick Douglass High School, an action police have blamed for sparking a night of rioting, looting and violent clashes with police. Two students were arrested in connection with rioting.

Thanks! You've been successfully signed up for the SWAT Newsletter