How cops can detect and prevent a dirty bomb attack

Preparing America's Cops For Terrorism in 2017: PoliceOne is providing special coverage on terrorism to help law enforcement prevent, combat and recover from a terrorist attack. Our expert columnists address prevention, preparedness, training, mitigation, response, recovery and lessons learned from incidents on U.S. soil. Check out all of our coverage here.

A dirty bomb, or radiological dispersal device, combines radioactive material with conventional explosives. The conventional materials explode to spread the radioactive substance, contaminating people and infrastructure with radiation. The potential result is terrifying, impacting human health and greatly disrupting the local economy of an affected area. With better, smaller and less expensive detection devices now on the market, law enforcement is increasingly seeking out these latest tools to detect and prevent this type of terrorist attack.

Dispersing radiological material is a way to shut down or interrupt economic activity. A radiological event would be extremely costly to control and clean up. The loss of an important building like a sports stadium or an office tower could disrupt business for an extended period of time. In the case of a stadium, which might take months to clean, booked events would be forced to find another venue.

Terrorists may use an incident to create public panic. The highly toxic nature of radioactive materials and their threat to life make them frightening. Even if injuries are minimal in the initial explosion, the radioactive material that citizens inhale or ingest can cause a lasting risk to health, increasing the potential of disease. Tests monitoring the impact of small RDDs show the immediate spread of toxic materials may be minimal. If radioactive particles enter an HVAC system, however, and then flow through the air ducts in a building, the risk to human health greatly increases.

Concern is growing that the widespread availability of radiological materials may result in a dirty bomb attack. In the United States, the security around radioactive materials from nuclear facilities is very tight. That is not always the case around the world. For example, in November 2016, thieves stole radioactive material from an Iranian nuclear power plant—including iridium-192, an isotope that could fuel an RDD.

Nuclear plants, of course, are not the only places where radioactive materials exist. In March 2016, the Nuclear Threat Initiative released the Radiological Security Progress Report: Preventing Dirty Bombs, Fighting Weapons of Mass Disruption.

The report details sources of material for use in a dirty bomb. Hospitals use radioactive materials in diagnostic procedures and cancer treatments. Blood banks and hospitals irradiate blood for use in immune compromised patients. Food is irradiated, as is water and other beverages. Manufacturers of devices for medical and industrial applications embed small amounts of radioactive materials in their products. These places represent sources of radioactive materials which are not well secured. The Nuclear Threat Initiative report says that “a single nuclear source in just one blood irradiator in a hospital would provide enough radioactive material for a dirty bomb attack that would result in billions of dollars in damage.” The report’s authors indicate that the potential for terrorists detonating a dirty bomb is greater than for an improvised nuclear device because of the extensive availability of radiological sources.

How can security personnel at facilities that house radiological sources diminish potential theft of radiological material? And how can law enforcement agencies ensure that the public is safe from radiological threats that would result from such thefts? They can adopt technology that continues to become more accessible to non-experts in radiation detection.

Monitoring radiation levels at known locations of radiation, such as a nuclear power plant, is straightforward with fixed, installed radiation monitors. Protecting the public from an unknown source of radiation, like a dirty bomb, is significantly more challenging. With numerous fixed targets such as buildings, public parks and monuments, as well as mobile or temporary targets such as parades, races or special events, police departments must utilize a mix of different sized detectors to locate threats.

Like a large floodlight, large detectors that are contained in a vehicle or backpack allow officers to quickly see abnormal radiation levels in a large area. While effective at finding radiation, these detectors are not as useful in pinpointing radiation in a crowded event. Small, personal radiation detectors, worn covertly by all personnel, behave more like flashlights, providing radiation detection in the immediate area around the wearer. While not as sensitive as the large units, they can quickly pinpoint the location of radioactive sources easily, allowing officers to respond to the exact location of a threat. These units are comparatively inexpensive, can be quickly positioned and provide a net-like coverage over an entire city. Wherever a law enforcement officer travels, that detector goes as well.

Next-generation PRDs are also able to reduce false alarms without sacrificing sensitivity, due to advancements in portable electronics and implementation of complex algorithms which would typically run on a personal computer. With traditional PRDs, high numbers of false positives are caused by natural radiation commonly found in building materials and food and non-threatening alarms have been caused by patients who have recently had a nuclear medical procedure.

The newest detectors available continuously analyze the environment and immediately differentiate between artificial and natural background radiation, eliminating most false alarms without sacrificing sensitivity. They can also quickly identify the class of radioactive agent present, the actual isotope and its typical application. This added benefit gives security personnel additional real-time information in the palm of their hand.

For example, patients recently treated with radiation for a medical purpose may trigger several alarms daily to a single detector. Next-generation PRDs detect the radiation and properly classify it, providing key information about the specific kind of material to support an officer’s intuition or prevent him or her from leaping to a false conclusion. If receiving an alert for material that should not be present given the context, the officer can act with greater certainty. Knowing the type of material also helps first responders treat contaminated people in the actual event of an RDD explosion.

The graphic below illustrates how, when an unusual form of radioactive material is detected, a modern, basic portable detector can immediately indicate whether it is from a naturally occurring or artificial, man-made source. This capability allows users to immediately dismiss nuisance alarms (natural radiation) and focus on the alarms that could potentially be dangerous (artificial radiation). The device on the left detected naturally occurring radiation, likely from sand, granite or other natural stone. The device on the right, however, detected low energy particles, which are generally associated with radioactive materials used in medical applications and some nuclear weapons. Higher-end models will return additional information on the exact class and isotope of radiation, allowing further alarm investigation capability, and whether or not additional procedures to secure the source are required. 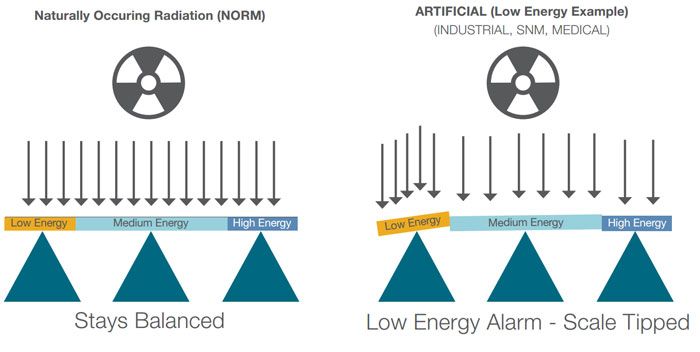 What you can do to prevent risk

There are several steps that law enforcement agencies can take to make sure that unsecured sources of radioactive materials do not lead to a dirty bomb attack. Among them:

The availability of grants is not the only reason why detectors are more accessible to law enforcement agencies. As these instruments have become smaller, faster and more portable, they have also become easier to use. Security personnel do not need to be experts in radiological material in order to accurately and decisively detect radiation sources. By embracing the latest technological advances, they can be in a better position to prevent a dirty bomb attack.

About the author
Scott Masiella is the global safety and security market manager for Thermo Fisher Scientific. He manages the product roadmap and new technology direction for Thermo Fisher’s radiation measurement and security instruments business. Masiella has nearly a decade of experience working with law enforcement and fire departments globally to solve radiological and nuclear detection and identification problems. As both a product manager and a development engineer, Masiella has been responsible for developing new software applications, portable handheld instruments, man portable instruments and vehicle bound radiation detection and identification systems. Previously, he served as lead mechanical engineer for GE Healthcare.